The Long Range Guns of Mammoth

Thank you! Your submission has been received!
Oops! Something went wrong while submitting the form.
4291

More than a few of us have been bitten by the long range shooting bug recently. With the promise of multiple Mammoth Sniper Challenges throughout the year, you don’t have to have taken AP calculus to figure out that the demand for quality, long range capable rifles is on the rise. If you think money supplants range time, your options are limited only by your checking account. For the rest of us, our wallets are easily busted. So, every bit of value must squeezed out of every dollar spent on the sport.Enter the Ashbury Precision Ordinance (APO) M700 saber, a wallet friendly rifle with high dollar performance. Unlike most rifles at the two grand price point, the M700 Saber is not one your skill set with easily outgrow. Designed by APO to be highly modular and re-configurable, pretty much every piece of the Saber can be swapped out to meet the shooter’s skill and/or specific use needs WITHOUT needing special tools or going on a search for a skilled gunsmith. A set of allen keys and a torque driver is pretty much all you need create your own “custom” rifle.[caption id="attachment_23010" align="alignnone" width="300"]

When I first decided I “needed” to go big and test myself at the Mammoth Sniper Challenge, I also decided I needed a rifle up to the challenge. Suffice to say if your rifle is less than stellar, you’ll be spending a miserable and frustrating 3 days with nothing but blisters and a sore back to show for your efforts.Though also available in a .308 variant, the easier shooting 6.5mm Creedmoor fits the bill of the challenge ahead. The engineers at Ashbury and I discussed my shooting history, intended use as well as my overall goals in long range shooting. We eventually created a configuration that was perfectly suited for what would lie ahead.I was assuming my “status” as a writer, was garnering me a little extra attention. However, I soon learned that this attention to the customer is S.O.P. for APO. The team at the Virginia based company love to talk about the minutia of the engineering data but more over they are high level shooters and love to talk shooting. The numbers they crunch are also proven on the range. This translates into a deep well of experience and knowledge to help customers get a near custom rifle at “off the rack” pricing.[caption id="attachment_23009" align="alignnone" width="300"]

The rifle that eventually ended up on my doorstep started off as a Remington Model 700 SPS Tactical AAC SD barreled action. Not just any Remy Barreled action makes it into the Ashbury line up. A Strict quality control process, in addition to Remington’s, makes sure only the best make it to a APO chassis. Starting of with best action/barrel marriages Ashbury does a little extra magic to sweeten up the performance.The Saber comes in 4 pre-configured set ups; Precision Rifle, Tactical Hunter, Long Range Tactical Hunter and Sporter. APO’s Precision Rifle configuration is best suited for Mammoth. The above mentioned barreled action floating inside an AR inspired chassis, with Luth-AR MBA1, Magpul MOE grip and M-lok compatible octagonal hand guard. A 20 MOA rail carried a Steiner MX5i optic.One necessary change I felt I had to make on APO’s factory set-up was something Ashbury didn’t control. I immediately swapped out the Remington X-Mark pro trigger for my go-to bang switch, A trigger tech adjustable 700 trigger. Being THE key interface b/w shooter and rifle, the trigger is a very personal choice and rather impose their will on a customer and increase cost, Ashbury keeps the stock Remington trigger. Some may like the solid heavy 5lb pull of big green’s v-mark. My tastes lean toward the gentle snap of the trigger tech adjusted to 3lbs, which I feel is a good compromise between light enough to no pull the gun off the mark when making it go bang and being heavy enough to avoid an ND when settling into a position.

To round out the kit, I quieted everything with a Silent Legion Direct 5/8-24 thread 6.5 suppressor. The North Carolina company makes high end silencers that dutifully reduce gun noise into hear sage ranges. To see my targets I used a Steiner Optics MX5i 5-25x56 scope.It’s common for reviews to include a table showing ammo tests measuring 3-5 shot groups the writer determined to be representational of that rifle/ammo performance. I may cause a few eyebrows to raise but this rather un scientific approach tells little about the rifles long term performance or accuracy. That being said how do I convey just how well the APO M700 Saber does perform? I went straight to the source to find out. I asked the folks at Ashbury Precision Ordinance to prove to me just how accurate their rifle is.[caption id="attachment_23006" align="alignnone" width="300"]

Eventually, I challenged APO’s engineers to shoot their best 5 shot 100 yard group. Additionally, with ammo they felt would perform the best. Then compare that to their best 5 shoot 100 yard group with the ammo of my choice. They chose Federal Premium 130gr; I went with Hornady 147gr. ELD match. A picture is worth a thousand words and I’ve included photos of the Test targets from both strings. Subtract out the .264” diameter of the projectiles the Federal group had a vertical spread of .134” while the Hornady’s vertical delta (minus the .264”) came in at an amazing .042. Both strings were shot by a former military sniper, from the prone position, and the rifle was supported only by a front bipod and rear squeeze bag.[caption id="attachment_23007" align="alignnone" width="225"]

130 grain grouping[/caption]Off the shelf, this rifle shoots back to back sub .2 MOA 5 shot groups. Furthermore, with two different weights and profiles of match grade ammo. For the budget minded competitor the Ashbury Precision Ordinance M700 Saber proves an high performance rifle can man be gentle on the wallet.[caption id="attachment_23008" align="alignnone" width="225"]

The Mammoth Sniper Challenge Load Out 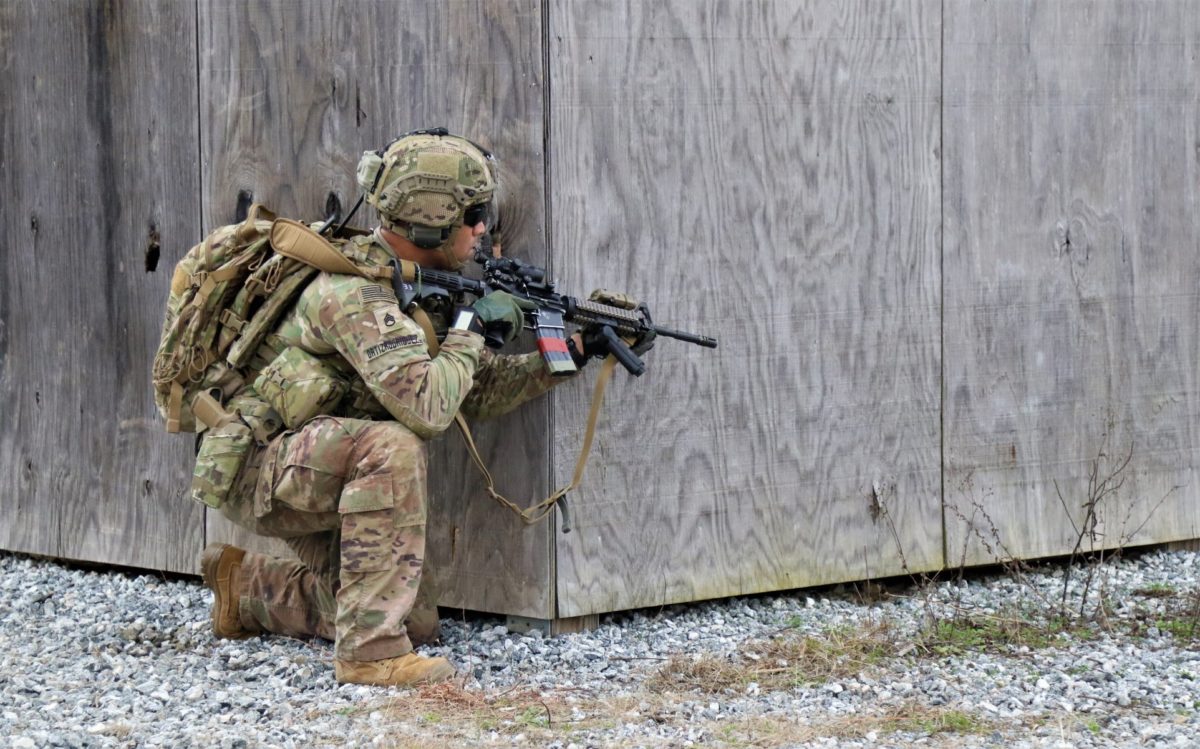